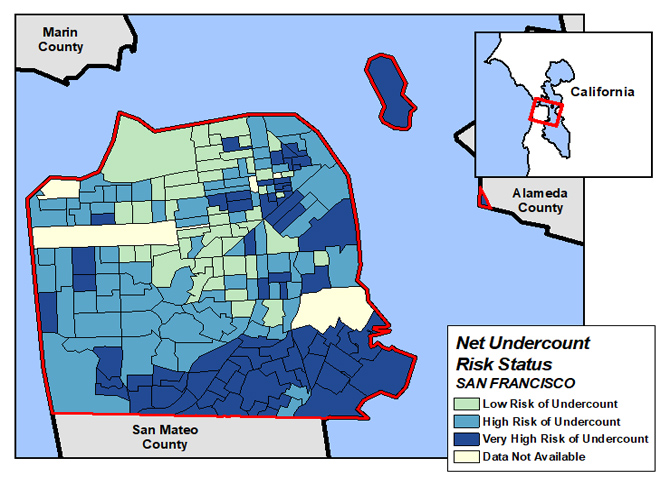 The census informs much of the data we share with you. A well-known challenge is that children are hard to count, some more than others. Guest author, Beth Jarosz from the Population Reference Bureau (PRB), discusses the importance of the census for children and the challenge of counting children accurately. She also shares a useful resource that predicts the hardest to count areas in California. Let’s all help ensure an accurate count on April 1, 2020.

Importance of Counting All Children in the 2020 Census

Every ten years, the United States counts the population of the nation, states, counties, and neighborhoods. This decennial census is so important that the U.S. Constitution requires it. Decennial census data are the foundation for political representation and redistricting but also have a wide variety of other important uses that impact children.

Funding allocation: Census data are used to allocate billions of dollars of federal funds each year. Much of that funding directly benefits children through programs such as Head Start, Supplemental Nutrition Assistance Program (SNAP), and the National School Lunch Program, which reimburses schools for free and reduced-price meals provided to eligible children.

Planning, policy, and programmatic decisions: Decennial census data also influence local policy and planning decision-making. For example, by tracking the number of children in a community, officials can anticipate the need for new classrooms or schools.

Benchmarking surveys: The census is crucial for surveys – American Community Survey, California Health Interview Survey, National Survey of Children’s Health, and others – because the population data gathered in the census forms the framework for collecting and weighting the data in those surveys.

Counting the Entire Population Accurately is a Challenge

While the goal of the 2020 Census is to count every person once, only once, and in the right place, counting more than 300 million people across nearly 3.8 million square miles is a considerable challenge. Despite the best efforts and careful planning of Census Bureau staff, the direct, physical enumeration of the U.S. population is imperfect. Some people may get counted more than once. For example, children in shared custody living arrangements may be counted more than once, and youth away at college may be counted at both their college and parental home. Some people may not get counted at all—people who lack a permanent address or who move frequently are at higher risk of being missed in the census.

Young children are most at risk of being missed. In 2010, the Census Bureau estimated that their total overcount was fairly small (about 36,000 people, or 0.1 percent of the population), but over/under-counts varied by age, race/ethnicity, and other characteristics. Both the 2000 and 2010 Censuses tended to undercount young children, renters, and some racial/ethnic groups, and to overcount older people, non-Hispanic white people, and homeowners.

PRB, using data provided by the Census Bureau, developed a new measure of undercount risk by neighborhood (referred to as census tracts) around the country and then categorized these communities based on the risk of undercount for young children.

To help communities identify these high risk areas and provide guidance for outreach and services that may help ensure a complete count, PRB has made these data available through an online and interactive Hard to Count 2020 Map application. This was developed by the CUNY Mapping Service at the City University of New York’s Graduate Center.

An example is shown above. In San Francisco County, we can identify in which tracts counting young children ages 0 to 4 will be particularly difficult.

You can learn more about the factors associated with undercount and about nationwide efforts to count all kids. You can also find out how to get involved directly in California’s Complete Count efforts.

This entry was posted on Friday, February 7th, 2020 at 2:36 pm. You can follow any responses to this entry through the RSS 2.0 feed. You can leave a response, or trackback from your own site.

This blog provides timely insights about how children in California are faring, addresses your data queries, and offers information about children's data issues. Any suggestions? E-mail us. Kidsdata.org is a program of the Lucile Packard Foundation for Children's Health, and this blog is authored by Foundation staff.