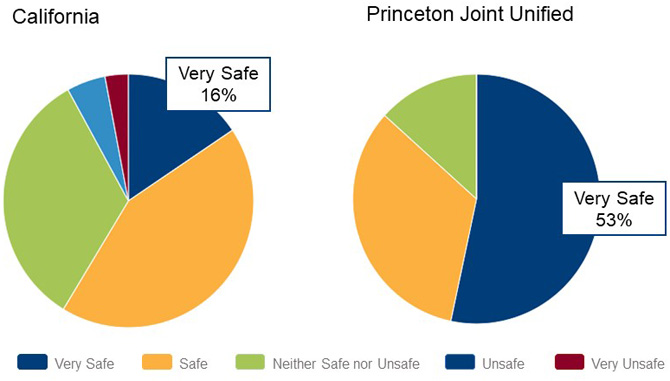 All California students deserve to feel comfortable and secure at school. Perceptions of school safety are essential for learning, building friendships, and supporting emotional and physical health. However, the California average differs substantially from the best performing school district in school safety, among districts with data. The statewide average of 9th grade students who felt very safe at school during the 2015-2016 and 2016-2017 school years was 16%, far below the average in Princeton Joint Unified School District (Glenn County) where 53% of 9th grade students felt very safe. This gap between the California average and the best performing district suggests that we can do more to create nurturing school environments for all students.

Data on student behaviors, such as fighting or carrying a weapon, help further inform disparities in school safety. During the 2015-2016 and 2016-2017 school years, 11% of 9th graders were in physical fights, 2% carried a gun, and 6% carried a weapon other than a gun at school, though percentages varied by school district. By looking at student perceptions of school safety and behaviors that play a role in being safe, we can make informed decisions on policies and programs that support each child’s well-being.

Elevate local issues such as school safety with school district-level data. Find your school district’s safety data on the Data by Region tab. Click into your county, select your school district, then choose the “Child and Youth Safety” radial button to customize a table into a compelling figure that expresses your concern in children’s well-being.

We recently released data about School Safety. See links to the latest here.

Integrating ACEs Science in Pediatrics: Early Adopters Share Lessons from the Field
Thursday, October 17 at 8 am PST, hosted by 4CA and ACEs Connection

In 2017, California became the first state in the country to pass a law supporting universal screening for adverse childhood experiences (ACEs) in the 5.3 million children in the state’s Medicaid program. Drs. Deirdre Bernard-Pearl, R.J. Gillespie and Ariane Marie-Mitchel will discuss how to transform an entire clinic or medical residency program for screening families for ACEs and offering them support. Learn more and Register.

This entry was posted on Friday, October 11th, 2019 at 10:41 am. You can follow any responses to this entry through the RSS 2.0 feed. You can leave a response, or trackback from your own site.