Prevalence of Adverse Childhood Experiences Among California Adults Living in Households With Children, 2013-2019 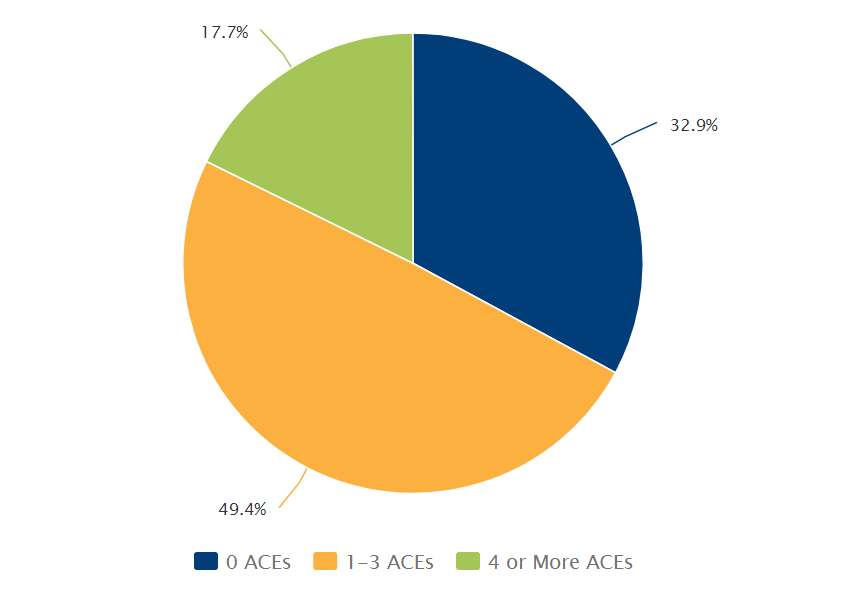 Adverse childhood experiences (ACEs)—such as abuse, exposure to domestic violence, divorce of parents, and growing up with substance abuse or mental illness at home—can disrupt a child’s development and have lifelong negative consequences. Unfortunately, these experiences are all too common.

Exposure to ACEs is linked to many chronic health conditions in adulthood, including cancer, depression, heart disease, obesity, and substance abuse. It is also linked to social problems such as behavioral and learning challenges, homelessness, poverty, and unemployment. The more adversities someone experiences, the higher the likelihood they will suffer substantial and long-lasting social, financial, and health effects throughout childhood and into adulthood. The effects can even be passed from generation to generation.

But negative outcomes aren’t inevitable. Support from healthy relationships and environments can buffer the negative effects that childhood adversities can have on a person’s life.

How Are Children Affected by Adults With ACEs?

Adults who experienced adversities in childhood are more likely to have economic hardship in adulthood. Children in families with economic hardship or high parental stress are more likely to experience adversities than children in less-stressful family environments. In addition, parents and caregivers who experience physical, mental, or financial difficulties of their own may struggle to nurture and provide buffering supports for their children. Because of these links, the effects of an adult’s ACEs can be transmitted to subsequent generations.

Who Is Most Affected by ACEs?

Some populations face greater adversities in childhood than others.

The BRFFS findings show, statewide, that in households with children:

How Can We Break the Cycle?

Read more about strategies to prevent and address childhood adversity.

Join us for “Adverse Childhood Experiences (ACEs) in California,” a webinar hosted by the California Essentials for Childhood Initiative and KidsData that will be held on Wednesday, June 29, 2022, from 9:00 a.m. to 10:00 a.m PT.

KidsData in the News

U.S. Birth Rates Rose Slightly in 2021 After a Steep Drop in the First Year of the Pandemic, CDC Data Shows

In a CNN interview, KidsData Acting Director Beth Jarosz discusses the rise in the preterm birth rate in 2021, as well as the overall increase in births that year.

A La Opinión story quoted KidsData Acting Director Beth Jarosz on worrying trends in teen mental health and groups, including indigenous and LGBTQ+ youth, who are at high risk.

California Has a Child Care Crisis. How Finding It—and Paying for It—Can Be a Nightmare

A Business Enterprise article cited KidsData information on the share of children ages 12 to 17 who reported needing help for emotional or mental health problems such as feeling sad, anxious, or nervous.

The California Essentials for Childhood Initiative has released a new report describing the prevalence of ACEs in California, ACEs-related demographic disparities, and the impacts of ACEs on mental health, behavior, and chronic disease.

PRB compiled research on how gun violence affects youth in the United States and what policy strategies can help reduce risk.

See links to the latest here.

This entry was posted on Thursday, June 23rd, 2022 at 11:51 am. You can follow any responses to this entry through the RSS 2.0 feed. You can leave a response, or trackback from your own site.