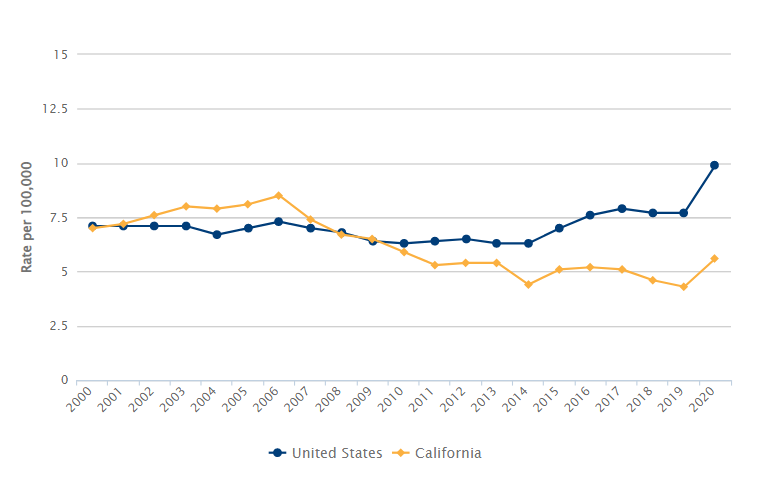 National Gun Violence Awareness Day is this week, and last week 19 children and two adults were killed by a shooter at their elementary school. At KidsData, we strive to keep our writing fact based. The fact is, last week many parents—including us—had tears in their eyes as they dropped their children off at school.

The grief we feel as a nation over this tragedy is real. The terror parents are feeling is nearly paralyzing. But paralysis won’t solve this problem. KidsData is dedicated to numbers and here’s one that every Californian should consider:

17,031 who will never start families or see their own children grow up.

Guns are now the leading mechanism of injury-related death for children in the United States. In 2020, for the first time in decades, more children ages 17 and younger died from guns than from motor vehicle crashes. That’s not because fewer car crashes occurred in 2020, but because the number of gun deaths rose faster.

Even though California’s rate of gun-related child and young adult deaths has been well below the national average for a decade, 2020 saw a dramatic increase, led primarily by a rise in homicides.

As grim as these numbers are, they tell only part of the story. Each young person who is lost leaves shattered family members and grieving friends. The numbers also fail to convey the impact on survivors of gun violence who often suffer serious injuries and psychological trauma. (In 2020, 11,258 children under age 18 across the United States went to the emergency room with nonfatal gunshot wounds.) And the numbers cannot capture the traumatic impact of gun violence on all of us as a society. As just one example, a study found that mothers who witness at least one shooting in their community were up to 60% more likely to meet criteria for depression than mothers who did not.

What Can We Do?

Despite more than two decades of a federal freeze on funding gun violence research, we know that there are effective ways to reduce gun violence and gun deaths. For example, safe gun storage works. Research on child access prevention laws links them to a 17% reduction in firearm-related homicides committed by juveniles.

The authors of “Dying Young in The United States: What’s Driving High Death Rates Among Americans Under Age 25 and What Can Be Done?” propose a thorough list of research-backed policy solutions to reduce gun deaths among children and youth, including:

The evidence shows that these common-sense practices could make a big difference. We have 17,031 good reasons to put them into action.

Explore the latest data on firearms deaths at KidsData.org, and stay tuned for updated firearm injuries data, to be added when new data become available.

Adapted from the PRB blog “31,780 Reasons to Care About Gun Violence.”

This entry was posted on Thursday, June 2nd, 2022 at 9:44 am. You can follow any responses to this entry through the RSS 2.0 feed. You can leave a response, or trackback from your own site.